The 5 Key differences between Innovation and Disruption

And though I greatly agree with the definition of disruptive innovation, I propose to simply refer to it as disruption.  Let’s keep things simple please!

Let’s find out which those are:

The market where innovation happens, is the existing market of the innovator, as opposed to the disruptor’s market, which is either a new market or an underserved market segment.

But you can’t always blame incumbents, as they can be truly hostages of their existing markets, since their current customers are generally not interested in radical improvements, but are looking for stability and predictability.

In the b2b market, existing technology meets certain standards, and existing customers are not willing (or able) to alter their current infrastructure to implement radically different technology, even if there are signficant gains to make with the new technology (although yes, today, with all the apps popping up, this plays less of a role and other barriers, like compliance, security, business continuity and control).

In any case, this means that for existing players, it is on the short term far more interesting to invest into improving the existing technology (hence, innovation), leaving as such fewer resources to invest in disruptive technology.

In the consumer market, the story is a bit different.

Here, it is simply the market that is looking for the current attributes.  For the majority of the market, ‘good enough’ is good enough for their typical usage of the technology.  Who needed a smartphone before Instagram and Youtube?

It is at the fringes of the market, that the disruption happens, because those people are not happy with the existing supply on the market.

And when new market players enter the market with a new technology that meets the needs of the unsatisfied market segment, then it creates adoption through the early adopters, and when the new features get more in demand on the market, the rest of the market can take over.

And this you can see in the growth curve.

Innovation has incremental gains, and the growth curve is as such linear.  At the same time, since innovation is based on improvements in and around the same technology, those gains are limited.

The growth curve of the disruptors takes the form of a sigmoid curve, no that is not a contraction of Sigmund Freuds name… It simply means an S-Curve.

This means that at first, growth seems to go very slow for the disruptive technology.  There are no immediate large revenue streams, and is as such ignored by the incumbent technology.

However, as we have seen, the technology gains traction by eating at the fringes of the market, meeting the needs of the underserved market segment.  After all, the early adopters consist of only 2 to 5% of the market, which is just a blip for dominant incumbents.

Then ‘suddenly’, when the benefits of the new technology are becoming clear to the rest of the market, the market is catching on, and the disruptive growth starts taking off the old incumbent technology, reaping all the rewards on the market. 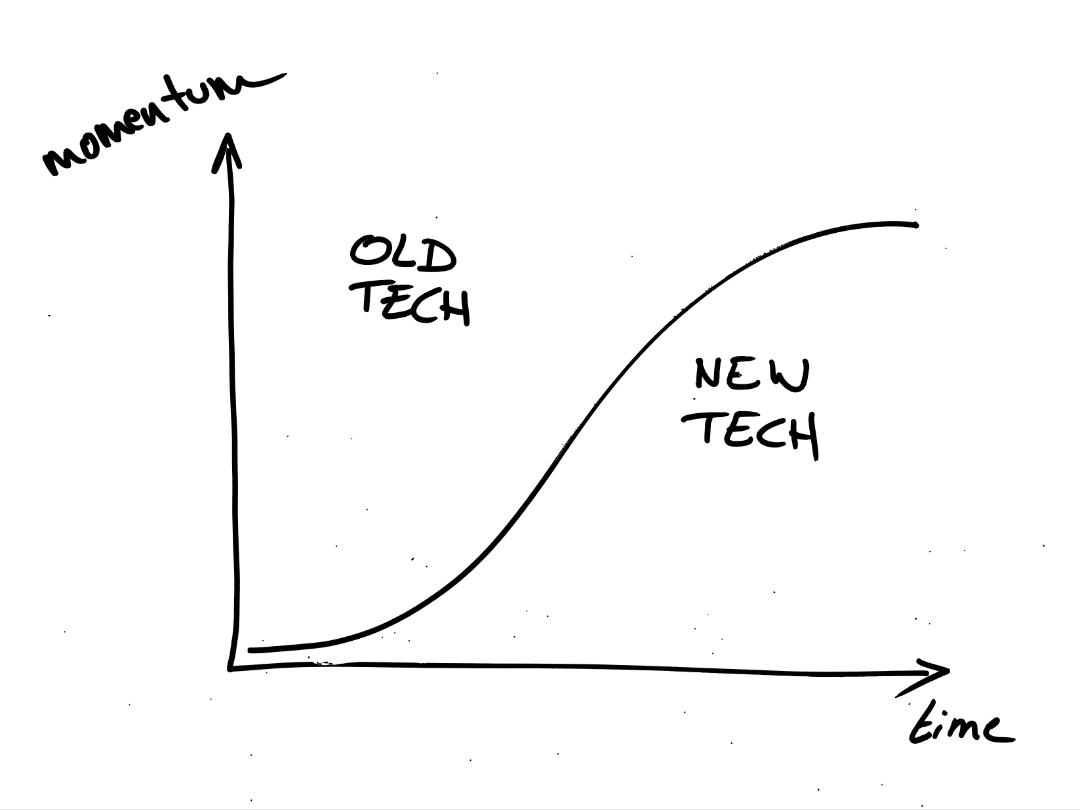 And this brings us to the gains.

With incremental improvements come incremental gains, though this does not necessarily mean incremental margins. For example, in business-to-business, organisations negotiate large services contracts, to maintain the infrastructure that they buy from other companies.

In these contracts, there is often a clause that talks about efficiency gains, and to have part of this returned to the client.  This means that, rather than increasing fees due to higher cost of goods and labor, these costs decrease with 1 – 2% (or more) per year.

This shows again the need for incumbents to focus their research on creating efficiency gains and to innovate.

As we have seen on the other hand, the gains are massive for a disruptor.

While a disruptor is first gaining experience and market share from the periphery and has limited gains, once they gain momentum on the market, they often take all the gains from that market.  Look how Whatsapp and Wechat basically killed the SMS revenue streams for the telcos, or how Apple reaps most of the profits in the smartphone market. As it stands, they take 87% of all the smartphone profit.

The fourth difference is the maturity of the technology, compared to the market this technology is in.

As I have written a couple of times, innovation is based on existing technology, focused on improvements.

Disruption however, is based on new technology.  It is important to note though, that new technology does not necessarily mean that it is invented from scratch.  It can be that the technology existed, but is new for the market.  For example, Indeed.  (Yes, where I work at the time of writing), use the existing cost-per-click model to disrupt the recruitment market.

The technology was developed by Google to disrupt the advertising market on the Internet.

Finally, the type of leadership is different. When you strive for disruption, then you need visionaries as leaders, people that are opportunity driven, and can create a compelling vision to rally the organisation and the market behind that vision.

In innovating companies however, you need managers, people that focus on gaining efficiencies, following procedures to avoid inconsistencies and non-compliance, and people focusing on micro management.

What company are you? What company do you strive to be?  As always, thanks for reading and keep on jumping the waves of disruption.

For updates in your inbox around accelerating your revenue and performance

You have Successfully Subscribed!